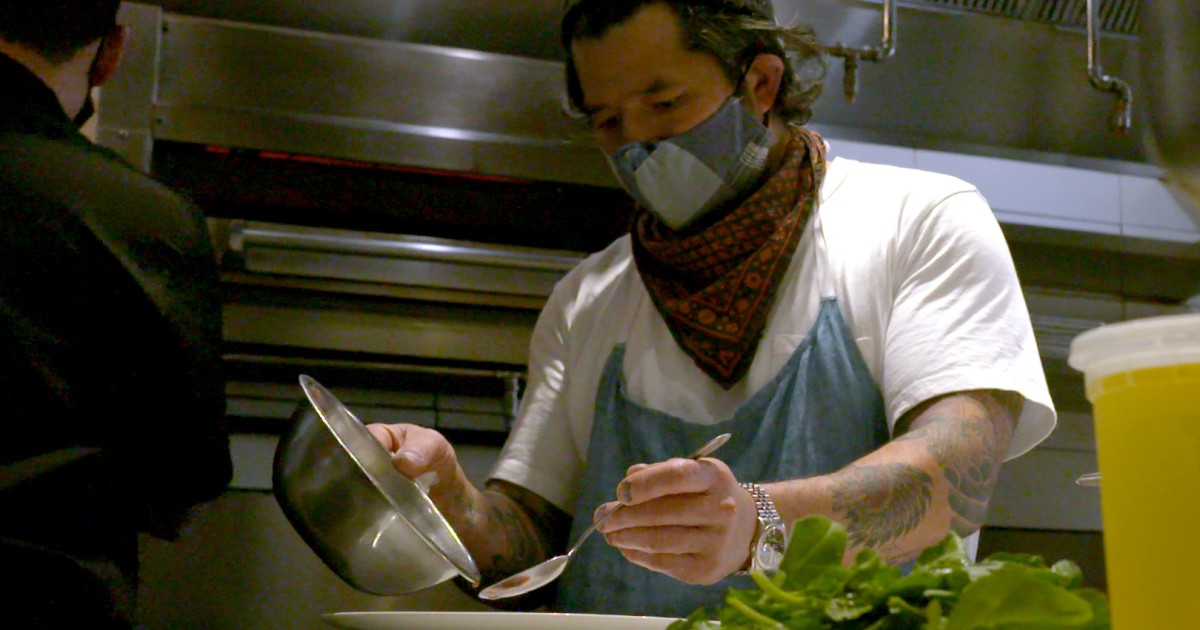 By JenSeptember 21, 2020Events, What is New
No Comments

Chef Josef Centeno started making a name for himself at top kitchens in New York and San Francisco including Vong, Daniel, Charles Nob Hill, and Manresa. Then he hit the big time in Los Angeles opening Bäco Mercat in 2011 and following up with, among others, Bar Amá and Orsa & Winston, which was awarded a coveted Michelin star last year.

He runs three restaurants. Bar Amá downtown and Amacita in Culver City channel the Tex-Mex heritage of Centeno’s native San Antonio, and Orsa & Winston, which opened next door to Bar Amá in September 2013.

I’m not one for dwelling too much on anything. I know that there is always a beginning, a middle and an end. But I wanted to acknowledge, say thank you and goodbye to a piece of work that has taught and given me more than I could have ever imagined. Bäco, you were born one night out of hunger and a little too much booze and who knew it would spark the light that would guide me through the years ahead. When I finally found you a home, I spent countless hours building parts of you and preparing you for the world. You helped me develop into so much more than a cook. You introduced me to so many ideas, spices and flavors that would shape the way I see the world. You forced me to do something every day that scared me (running a business does that pretty easily). It made me a better chef, leader and owner. You taught me to run an extremely successful business that would provide things for me and my team that we never could have imagined possible. But we are at a crossroads now. The world changed, and I have to make decisions about how to move forward and though the choices are difficult it is all part of the process. I want to thank @bettyhallock for all the support through these years and for writing the Bäco cookbook—and @bearloveswinston—I know it has not been easy. To @genevievemmh for helping me run these restaurants and keeping them together even through times when all we had was duct tape and some Elmer’s glue. To all the team members that stayed until the end and those who have come and gone, thank you for being a part of the experience. And to all our incredible patrons, thank you for supporting us all these years. It has been an honor to serve you! Bäco Mercat will live on, as we run special menu items at @bar_ama. Be on the lookout. As for the Bäco—you started as a dream and an off-the-menu-item and now you’ve come full circle. ⚡️⚡️⚡️

In a statement, Centeno thanked his staff, customers, and collaborators while also addressing the challenges restaurants are facing during the COVID-19 pandemic and the economic fallout.

“The world changed, and I have to make decisions about how to move forward and though the choices are difficult it is all part of the process,” Centeno wrote.

Opened in late 2011, Bäco Mercat emerged as one of the city’s best dining experiences over the last decade, standing out from the booming downtown food scene it had helped build.

As the COVID-19 pandemic forced much of L.A. to close down in March, Centeno and his staff prepared meals for healthcare workers in partnership with the nonprofit group Dine 11. Like many restaurants, Bäco Mercat had pivoted to takeout and delivery service over the last few months, and more recently, outdoor dining. The restaurant was also forced to closed briefly in late May after it was damaged during protests over the death of George Floyd in police custody.

Propelled by the success of Bäco, Centeno would go on to open a collection of successful restaurants near the intersection of 4th and Main streets: Bar Amá, the now-closed PYT and Ledlow, and Orsa & Winston, the intimate tasting menu restaurant named as The Times’ Restaurant of the Year last month.

Limited tickets are still available for a special, 3-course dinner from Restaurant of the Year winner Orsa & Winston on September 26. Enjoy your meal at home while joining Chef Josef Centeno and LA Times Food writer Jenn Harris, for a special virtual event and presentation of this award. Link in bio. 📷 @latimesfood #lafoodbowl

A special, virtual dinner party will be held on September 26th to celebrate the winners of the prestigious Gold Award and Restaurant of the Year Award announced every year.

“For the grace, ingenuity, and resilience that chef Josef Centeno has displayed in the maelstrom that is 2020, Orsa & Winston is The Times’ Restaurant of the Year award recipient. The Gold Award celebrates culinary excellence and challenges what Southern California cooking might be. This year’s recipient is the team behind Post & Beam, which has become a vital part of L.A. and the national dining scene.”

Check out the link below for a special dinner and virtual Food Bowl event with Restaurant of the Year winner Orsa & Winston.