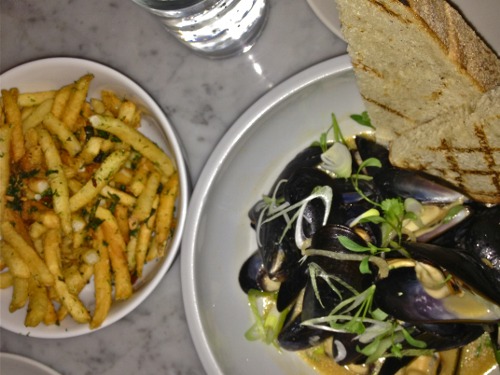 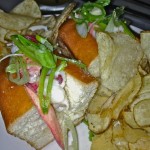 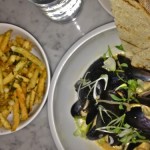 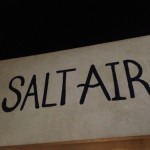 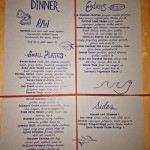 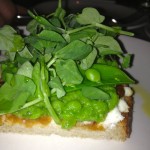 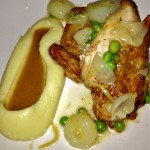 Perhaps it was that my favorite song was playing (Daydreamin’) or the pretty Abbot Kinney faces throughout the clean room, but when I stepped into SALT AIR Friday night, I felt invigorated by just that: the salt air.

My beau and I started off with one of their popular cocktails, a SHANDY. Made with sour beer, passionfruit, honey and lemon. Delicious and refreshing…exactly the kind of drink you want at a beach bistro.

Right away we were given complimentary corn fritters and a ping of guilt washed over me as I eyed the bread substitute. But that quickly dissipated as this fried ball of jalapenos, corn, and corn meal entered my mouth. I bobbed my head to another great song (epic playlist throughout the night) and knew that…this was gonna be a good one.

Our first appetizer, Pea Toast, was brought to the table. Who knew peas could be so good?! Ricotta, caramelized onions, sugar snap peas, jalapeno atop toast. The perfect app.

Next we had mussels and fries. Mussels in this town are often attempted the same way: coconut curry. However, many fail. They are often too spicy or the curry is too overbearing. These mussels were done just right. With enough broth to slurp up like soup, that bowl was left clean with the help of the grilled bread.

Next came The Best Lobster roll I’ve ever had. I admitted to our warm and attentive waitress, who could have been a friend, that I wanted to live inside of the roll. With buttery crisp bread and the perfect amount of succulent fresh lobster (not with mayo!) as neighbors, it would be the ideal abode. Go there and eat this!

It might have been a crime to order chicken at a seafood restaurant, but my boyfriend is not one to play by the rules. For our next dish, he chose the Pan Roasted Chicken, served with Gruyere Mashed Potatoes (drool), baby onions and more peas! Always ordering the best item, he won again. The chicken melted in your mouth. But this dish was to be eaten Thanksgiving-style…all together as one. The buttery potatoes with a hint of gruyere, the succulent and crisp chicken with the burst of onion and subtleness of pea created the perfect BITE. Comfort at its best.

I have also heard that the burger is perfection and their lobster omelette at brunch rivals the roll. Guess I’ll have to go back sooner than I thought.

Next time you find yourself wandering the hippest street in Los Angeles, duck into SALT AIR, and you too, will feel even more invigorated by their fare.