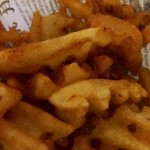 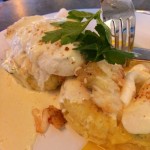 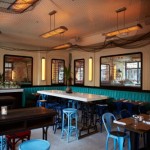 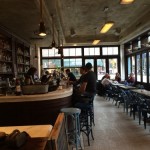 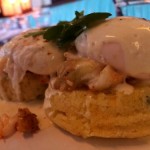 In the Lower East Side of New York City lays my favorite place to shop- Pixie Market. Just a few steps down those who love bivalves can stop into Tiny Fork. Opened in 2013 by Nightlife guru Rob Shamlian of Spritzer’s Corner, Los Feliz & Fat Baby and partner Frank Vivolo. The two level venues hold a restaurant raw bar upstairs, and a maritime lounge/nightclub below. I was lucky enough to stop in during what the waiter told me was the first weekend for brunch. As you enter this beautifully lit restaurant, the dining room boasts teal booths, wooden tables, mirrored walls, and an ice bar shelving crustaceans and bivalves such as; oysters, Alaskan king crabs, lobsters, clams, and more. Adjacent to the dining room is the bar with a marbled counter top, and nautical nick knacks along the walls. The menu offered fun items such as mac & cheese BARS, fried calamari, lobster rolls, fish & chips, to oyster sliders. I was in heaven! http://tinyforknyc.com/

Perhaps it was the rain, but for a Saturday afternoon in the LES the joint was quiet. I was happy that our waiter was so friendly and offered the new brunch menu.

In addition they offer this on the brunch menu- smash burger, mac &cheese bars, lobster grilled cheese, and fish tacos.

I have never eaten at Tiny Fork before, or ordered anything off the menu, but what I had ordered off the brunch menu was amazing. I was very pleased with the Lobster Eggs Benedict. It was spicy, but perfectly done. The cheddar corn bread was fluffy, filling, and zesty. The best part was the chunks of lobster- Tiny Fork, did not spare on the proportion of meat given for the benedict, nor the bulk of the lobster provided. The lobster was tasty and had bulk. Many a times, I have been to a seafood restaurant where Lobster is provided and it is a shameful dish and often too expensive. Alongside the benedict I ordered the waffle fries- Perfection. It would have been nice to serve the side order with an aioli sauce, however it came with ketchup.

Other than what I ordered- I fell in love with the Tiny Fork Michelada made with a lobster stock, old bay salted rim, bloody Mary mix, cilantro, lime, and a mermaid pilsner. Another tip- my girlfriend ordered the fish tacos, and to avoid the deep fried calories- order your fish grilled.